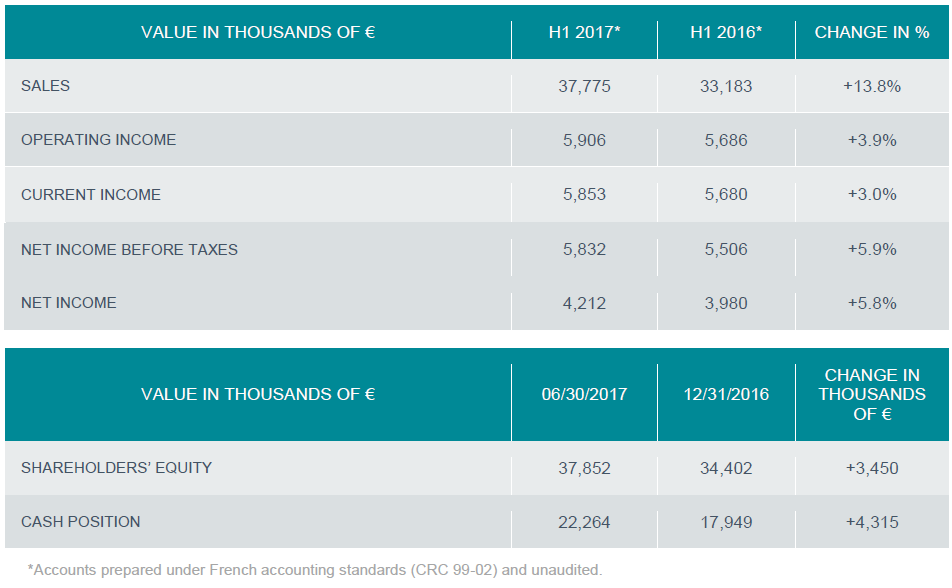 Strong growth despite unfavorable base effect

Esker’s 2017 half-year sales revenue grew 14% over the same period of the previous year. This growth was achieved by taking into account the activity of recently acquired German company, e-integration GmbH, as well as Esker’s dynamic organic growth. At constant scope and exchange rates1, Esker’s revenue growth was nearly 9% compared to the first half of 2016.

These results are noteworthy considering sales in the first half of the year suffered from an unfavorable, non-recurring base effect linked to several unusual licensing deals recognized in H1 2016. Consequently, licensing sales fell by more than 1 million euros in the first half of 2017 (equivalent to a three-point drop in growth). This will not occur in the second half of 2017.

The success of Esker’s cloud-based document process automation solutions continues to drive company growth across all markets. Revenue generated by cloud-based solutions was up 20% (at constant scope and exchange rates) in the first half of 2017, representing 84% of total revenue.

For the first half of 2017, Esker’s operating income increased by 3%, representing 15.6% of sales revenue. This level of operating margin is slightly lower than in the first half of 2016 (17.1%), but is up
over FY2016 as a whole (14.6%). This performance aligns with the company’s development plans, which seek to achieve sustained business growth and significant profitability to allow it to self-finance its development, remunerate the efforts of its employees, and reward its shareholders.

Operating income for the first half of 2017 set a new record. The strong profitability of Esker’s cloud-based solutions enabled the company to absorb the direct profit and loss impact of the sharp drop in license activity. This profitability has also allowed Esker to maintain an ambitious investment program fueling further profitable growth for years to come. Given non-significant financial and exceptional results and a tax burden consistent with 2016, net income increased by nearly 6% to 4.2 million euros.

As of June 30, 2017, Esker’s workforce worldwide, including the companies acquired, reached nearly 490 employees. Compared to the same period the previous year, the R&D department increased by 22%, the number of professional service consultants increased by 24%, and the marketing and sales departments are up more than 8%.

The first half of 2017 confirmed the growing success of Esker’s cloud-based solutions. The value of the contracts signed during the period (booking value) increased by 52% compared to the first half of 2016 and booking forecast is positive for the rest of the year.

Based on growing sales success and the recurring nature of its business model, Esker anticipates that the remainder of 2017 will reinforce the business trends achieved in the first half of the year. Esker generates more than 50% of its sales revenue outside the Euro zone (40% in the Americas alone), and is therefore exposed to currency fluctuations. This should not, except in the event of an unforeseen occurrence, significantly affect the financial year 2017.

Esker is a worldwide leader in cloud-based document process automation software. Esker solutions, including the acquisition of the TermSync accounts receivable solution in 2015, help organizations of all sizes to improve efficiencies, accuracy, visibility and costs associated with business processes. Esker provides on-demand and on-premises software to automate accounts payable, order processing, accounts receivable, purchasing and more. Founded in 1985, Esker operates in North America, Latin America, Europe and Asia Pacific with global headquarters in Lyon, France and U.S. headquarters in Madison, Wisconsin. In 2016, Esker generated 66 million euros in total sales revenue. For more information on Esker and its solutions, visit www.esker.com. Follow Esker on Twitter @EskerInc and join the conversation on the Esker blog at blog.esker.com.