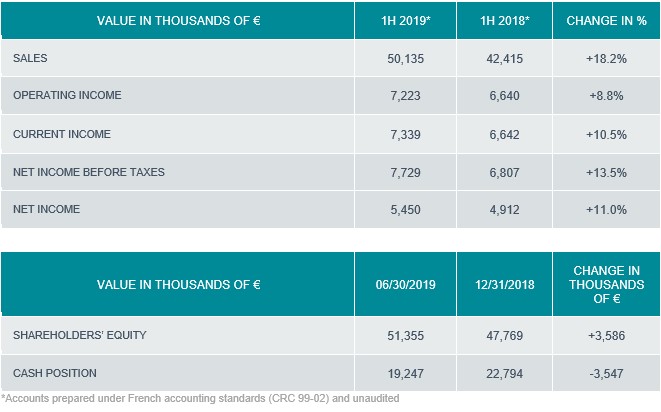 Esker’s 2019 half-year sales revenue grew 18% over the same period of the previous year (15% based on a constant exchange rate). Esker’s cloud-based process automation solutions increased by more than 19% to 44.8 million euros, representing nearly 90% of total company revenue. For the SaaS-based business, recurring revenue from traffic (not including consulting services) increased by more than 21% in 2019 (compared to 19.7% in the first half of 2018) to reach 36.6 million euros. The consulting business modestly grew by 7%, primarily due to investments made to integrate new internal and external resources (partners).

The first half of 2019 was also marked by a sharp rise in the value of new contracts signed. The cumulative value amounted to more than 11 million euros, up 52% compared to the first half of 2018, fueled by a successful sales performance coupled with a positive base effect on the U.S. markets.

For the first half of 2019, Esker’s operating income increased 8.8% to reach 7.3 million euros (14.6% of sales revenue). Taking into account non-operating items and a conservative effective tax rate, the net income increased more significantly to 5.5 million euros (an increase of 11% compared to the first half of 2018). The net margin is therefore close to 11% for the half year. Esker’s results were achieved in a financial context slightly favorable to the company’s business, particularly as a result of changes in the exchange rate between the euro and the U.S. dollar. The overall impact of currency fluctuations on operating income is estimated at 0.5 million euros, 7% of the half-year EBIT.

The profitability of Esker's business model and the increase in new contracts have enabled the company to finance its growth investments. In the first half of 2019, average company headcount increased by more than 17% over the same period in 2018. Jobs related to the implementation of the company’s solutions remain the leading investment sector and increased by 29%. This number includes the creation of dedicated customer experience department. Marketing and sales teams were also reinforced (+23%) with the goal of sustaining Esker's growth over the coming years. Esker will continue its recruitment efforts at a pace consistent with its growth while ensuring strong profitability.

The first half of 2019 confirms the growing success of Esker’s solutions and the recurring nature of its business model. Esker anticipates a second half that will confirm the trends observed in the first half of the year and be consistent with the performance achieved in recent years. Esker generated 47% of its sales revenue outside the euro zone (37% of which in the Americas) and therefore remains exposed to currency fluctuations. Recent currency developments do not currently jeopardize the company’s outlook for 2019.