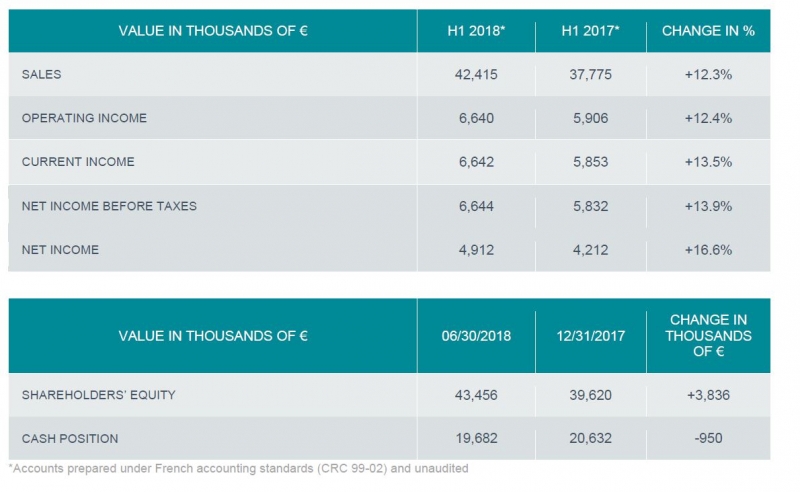 Esker’s 2018 half-year sales revenue grew 12% over the same period of the previous year (17% based on a constant exchange rate). Esker’s cloud-based process automation solutions increased by more than 20% (based on a constant exchange rate and scope) to 36.8 million euros, representing nearly 87% of total company revenue. The success of Esker’s solutions demonstrates the relevance of the positioning and strategic choices made by Esker in recent years.

Esker’s results are all the more significant being achieved in a context of unfavorable currency effects. The translation of non-euro based businesses in Esker’s financial statements (U.S. dollar in particular) reduced the company’s operating profit by an estimated 0.6 million euros. As a result, on a constant currency basis, operating profit growth exceeded 21% compared to 2017 and Esker’s profitability was more than 16% of revenue for the six-month period. A more favorable currency situation in the second half of the year would reflect positively on the income statement for the 2018 financial year.

In the first half of 2018, company average headcount increased by more than 13% to over 530 employees. A focus was placed on technical roles to support the company’s commercial successes — the professional service consultant department increased by 25% and the R&D department by almost 15%. Esker will continue its recruitment efforts at a pace consistent with its growth while ensuring strong profitability.

The first half of 2018 confirmed the growing success of Esker’s cloud-based solutions. The value of the contracts signed during the period (booking value) increased by 52% compared to the first half of 2017 and booking forecast is positive for the rest of the year.

Based on growing sales and the recurring nature of its business model, Esker anticipates that 2018’s first-half trends will be reinforced for the remainder of 2018. Because Esker is exposed to currency fluctuations — 46%+ of sales revenue is generated outside the Eurozone (36% in the Americas alone) — recent currency developments may contribute to a more favorable financial impact in the second half of the year and, therefore, 2018 as a whole.